One of the key principles that keeps us going forward at Karelics is our strong support for the open source community, the main driving force behind the healthy development of the ROS environment. We wholeheartedly believe that the achievement of our goals relies heavily on a strong connection which we must build with the leading developers of the worldwide robotics community.

It is then obvious that when we have heard that a new installment of the RosDevDay conference will also take  place in 2021 as an online event, in spite of all the drawbacks imposed by the ongoing COVID pandemic, we have decided that Karelics also had to be there and not by just simple attendance but also by being one of the gold sponsors of the conference. We did this in order to show our support and to share our knowledge and struggles from the past year with other ROS developers from all across the globe, while also learning from their experiences and mistakes so we can all together further push the known limits of the robotics field towards a future in which humans and robots can communicate and work together in complete harmony. 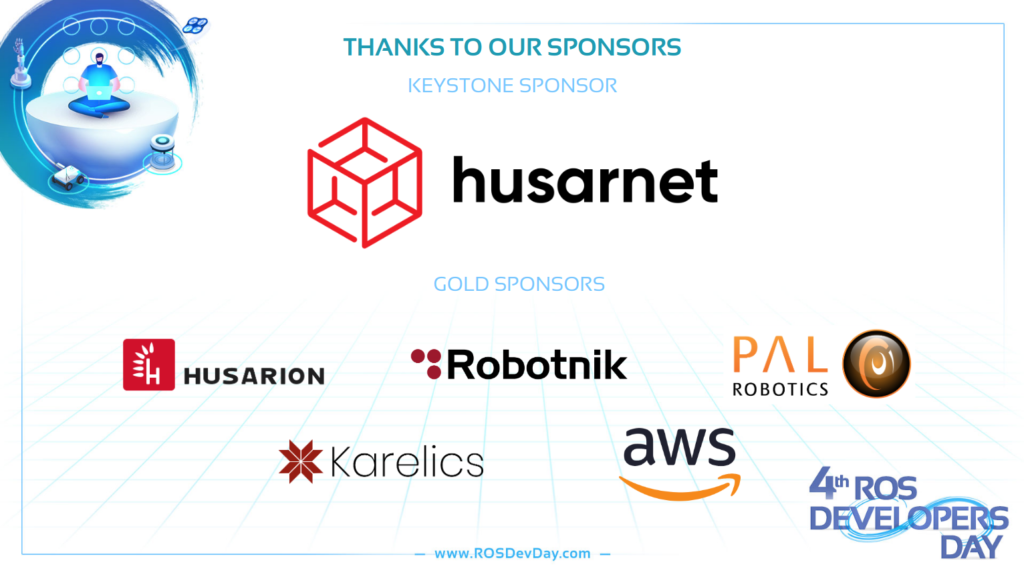 The sponsors panel at the RosDevDay 2021 conference

RosDevDay 2021 was the 4th edition of the conference and as it always has been the case it was organized by The Construct, one of the key companies actively involved in the constant improvement of the ROS environment. By being a gold sponsor of this event we wanted to make our presence known to the worldwide robotics community, let them know of what we are aiming as a robotics company and of the fact that we are here for the long run and we are ready to provide our full support. At the conference we had a presentation clip showing to the attendees what are our main products and what are we currently working on with ROS. At the end of our clip, the most eager of the attendees that correctly answered what Karelics Brain is was rewarded with a prize.

The start of our presentation video at RosDevDay 2021 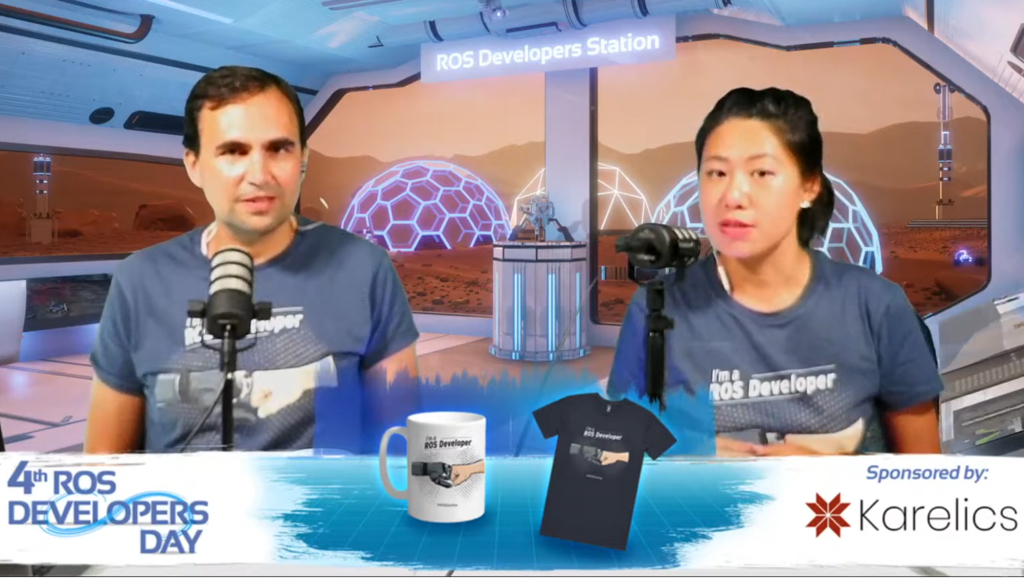 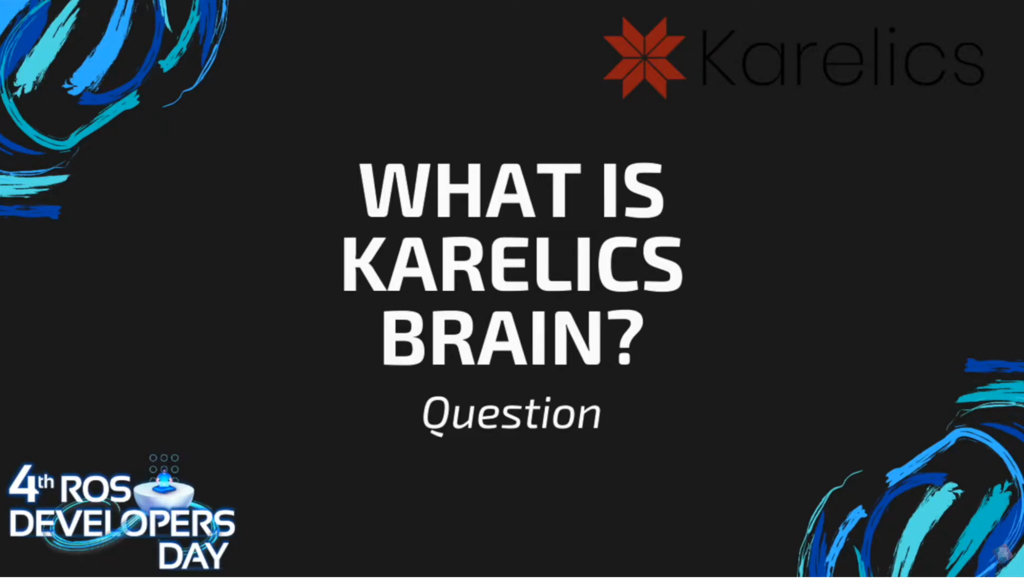 What we enjoyed the most about being present at RosDevDay 2021 was that we got to attend so many interesting presentations about new issues and promising prospects coming to ROS 2, which were delivered by some of the biggest names in the industry. Among the topics that were presented, our dev team specifically enjoyed the ones about enabling and using security in ROS 2, clean-up of obscured point-clouds and tackling multi-floor navigation using the ROS navigation stack.

All the presenters also provided fully working ROSjects that were hosted on the interactive ROS cloud environment provided by The Construct which our development team in Joensuu and all the other attendees were able to follow and with them recreate every step in the presentation, which in turn lead to a thorough understanding of all the outlined concepts. During the presentations, attendees were able to ask live questions which were then promptly answered by the presenters and our developers did not shy out of asking some very interesting questions to which they got really helpful answers.

The whole interaction process between the attendees, wherever they were on the globe, and the conference organizers was marvellously set up and so anyone could snap a photo of themselves and the place from where they were attending and tweet it with the tag #ROSDevDay and the main conference presenters were periodically showing them to everyone. Our developers in Joensuu did not miss the chance to show to the world their cool conference set-up which also involved the new and improved version of URobot’s Antero 2 robot and quickly tweeted a photo of themselves which was even noted by the guys from The Construct. 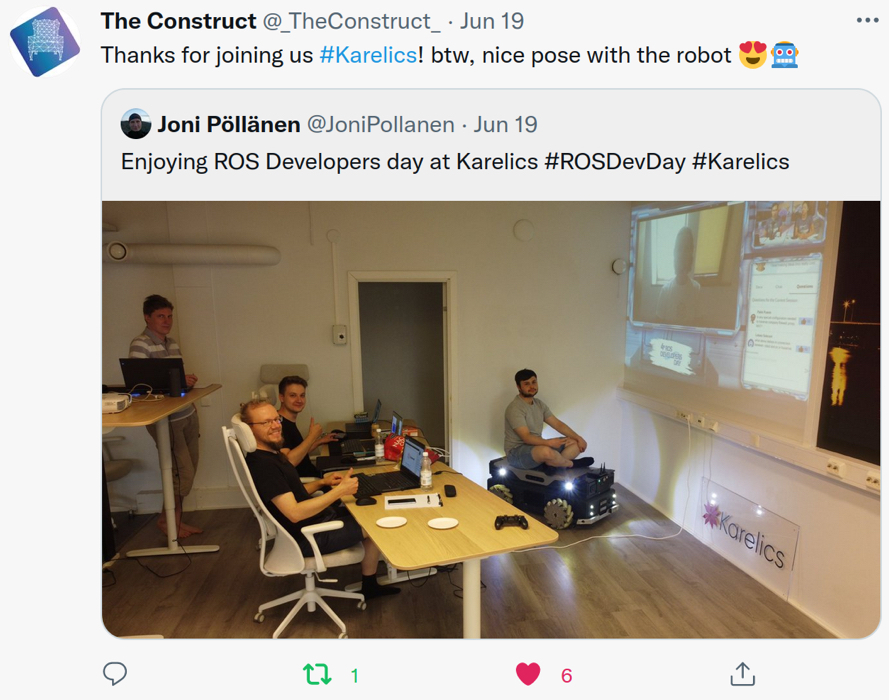 When we look back at it, RosDevDay 2021 was the very first moment we got to share with the robotics community from all around the world and we are thankful towards The Construct and all the other organizers for making it possible and providing such a great learning and connecting opportunity. We were happy to take part and happy that we got to learn so many new things, while at the same time letting the robotics world know who we are and what are our goals and vision for this field. We hope to have the chance to participate again in the next iteration of the RosDevDay conference and we promise to come again next year with new experiences to share. Until then, make sure to stay tuned for more updates on our blog as we have many new and exciting things coming soon!